Flipping the classroom: a keynote review 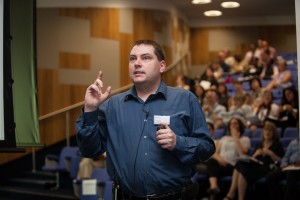 Credit: Ross Galloway at the 2015 UWL Teaching and Learning Conference by Claire Williams

The keynote speaker has really made me consider my delivery of teaching strategy and I have shared this approach with other staff who could not attend.

Delegate at the 2015 Teaching and Learning Conference.

The 2015 UWL Teaching and Learning Conference ran the theme Changing Landscapes: Rethinking Practice. It was an inspiring day, brimming with ideas on reconsidering how best to approach teaching in the HE classroom. The conference began with a keynote address from Dr Ross Galloway, Senior Teaching Development Officer at the University of Edinburgh, on the flipped classroom and the advantages it could bring to HE.

In order to make the most of the address, Dr Galloway chose to flip the lecture itself, therefore addressing the challenges and the advantages of the approach before the keynote itself. As a lecturer in physics, Ross chose to introduce the study of basic physics – in order to best express the methods he uses. The prospect of studying physics, despite the fact that Ross promised it would not be too arduous, certainly brought some delegates out in a cold sweat.

After a reading on the flipped classroom, explaining the concept and how the approach was used by the University of Edinburgh, delegates were asked to read some matter on falling objects, which was followed by questions. The task was rounded up with a Poll Everywhere quiz which checked understanding and, presumably, gave Ross a clearer idea of the general level of physics knowledge his audience had.

The keynote itself proved fascinating for many delegates, who came ready and engaged and with a view to introducing the approach to their own teaching. Ross was an extremely engaging speaker and provided a convincing argument on the merit of the approach, to even the hardest of sceptics.

While the statistics look extremely impressive and point towards an approach with considerable success, there appeared to be one primary concern which was raised by several members of teaching staff: that of students not doing the required pre-reading and pre-tasks. To address this, Ross referred to C. Turpen and N.D Finklestein Phys Rev ST: PER (2010), 020123 and the ‘Establishment of classroom norms’. He explained that in establishing the classroom norm of not allowing for a catch-up session at the beginning for students who had not done the required tasks, a norm was established: the norm that completing the pre-lecture task is an essential component in the session and a failure to do so would not be compensated. Ross estimated that after the first couple of sessions the norm had been established, and the vast majority of students completed the preparatory tasks.

The physics element of the keynote heavily involved peer instruction and the use of Poll Everywhere to check understanding. The approach has several stages: a question is posed; students think and vote (falling objects in this instance) on Poll Everywhere (or a similar system); this is then followed by a period of peer instruction with students discussing the answer amongst themselves; followed by another vote. As Ross himself noted, the act of submitting the responses through the use of online software, as opposed to merely thinking about it, forces a commitment of sorts to a position and to invest in an answer.  The process is then rounded up with a whole class discussion before the final ‘confirm and summarise’.

While the primary concept being addressed was that of the flipped classroom, peer instruction was given equal importance, with much of the keynote revolving around the concept. Perhaps, however, this is the key to the nature of the flipped classroom. It causes you to rethink the approach you use and how best to use the class time a teacher has with their students.

For further information on Ross’s keynote you can refer to his PowerPoint presentation: Flipped pedagogies and peer instruction – Ross Galloway

UWL staff can also acess a recording of the session via the conference community on Blackboard: online.uwl.ac.uk

He has also shared his personal reflections here: http://panopto.com/blog/ongoing-evolution-learning-biologists-continued-experiments-flipped-classroom/

Author: Marium Gabol is International Programmes Coordinator at the University of West London and the editor of informED. Festival of Learning and Teaching 2018