Twitter is a communication tool enabling you to keep up-to-date and share information with friends, classmates, colleagues, organisations and public figures. Twitter enables the exchange of quick, frequent messages. People post tweets, which may contain photos, videos, links and up to 140 characters of text. These messages are posted to your profile and to your followers on their Twitter App or on the Twitter website. 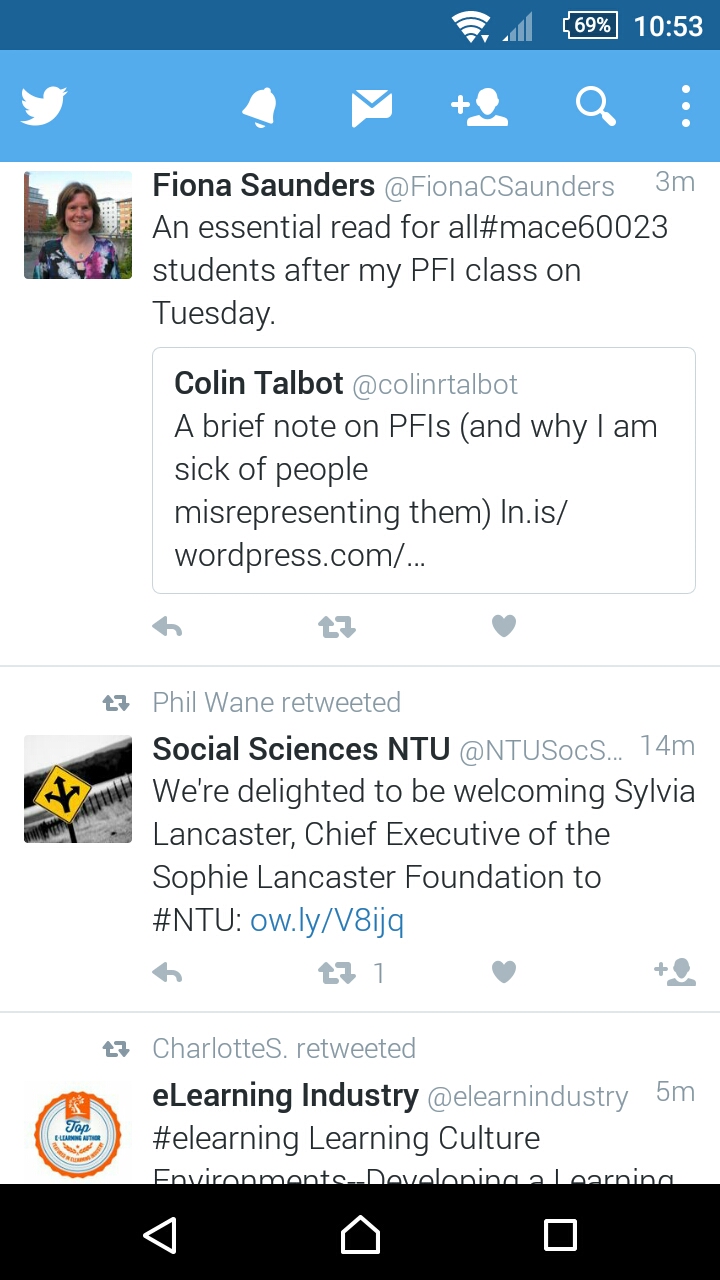 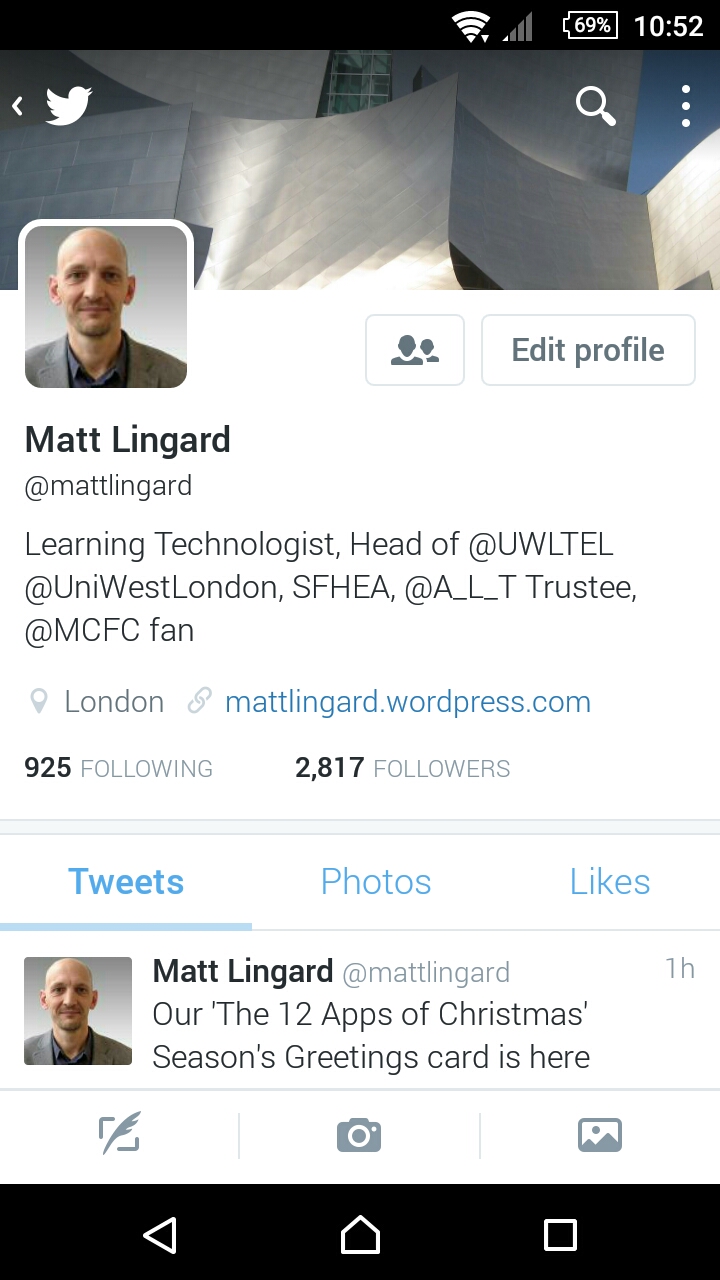 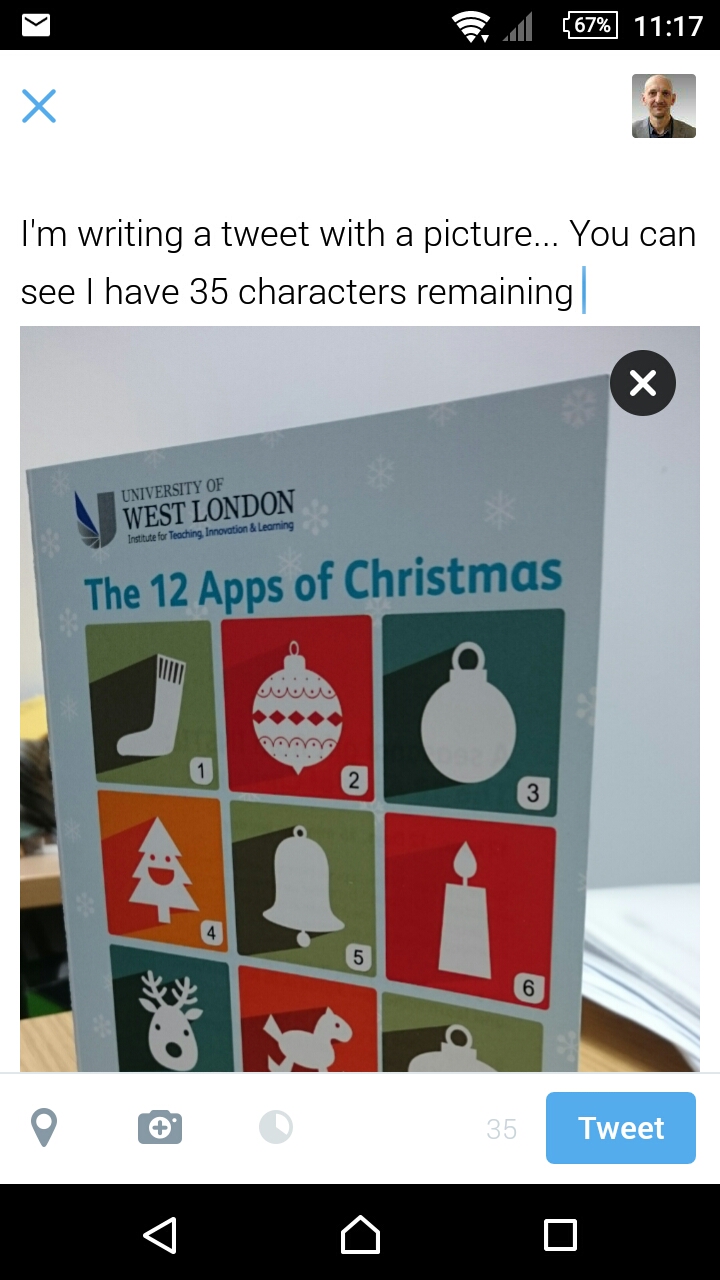 Twitter can be used in many ways and everybody uses it differently.

It can be used as a source of news, to share information, to ask questions (and get answers!) or just to share a picture of your lunch. Many people use it socially with friends and family but it’s a powerful tool for use in education or professionally if you connect with your colleagues, classmates, research community or others working in your sector.

Once you have an account the first thing you must do is start following people, only once you have followed enough people or organisations will Twitter be worthwhile and ‘make sense’. You can find people by searching for them. Browsing the followers of other users is also a good way to find people.

Twitter is a tool you dip in and out of. Don’t try to read everything. If you’ve not looked at Twitter for a while you don’t need to catch-up and read everything you’ve missed (it’s not email). It’s primarily about what is happening and being said by others at the time you are using it.

@username – A username is how you’re identified on Twitter, and is always preceded immediately by the @ symbol. For instance, Barack Obama is @POTUS and the Times Higher Education is @timeshighered.

Hashtag – See the power of hashtags below.

Mention – If you include someone’s @username in a tweet then you are mentioning them. Mentions are tweets in which your @username was included. Below @sjwrenlewis is mentioned in a tweet sent by @sebschmoller

Five informative observations on the Autumn Statement, by @sjwrenlewis: https://t.co/a5s0CB0ZdH

Profile – your profile displays information you choose to share publicly, as well as all of the tweets you’ve posted. Your profile along with your @username identify you on Twitter.

Reply – A response to another user’s tweet that begins with the @username of the person you’re replying to is known as a reply. Reply by clicking the reply button

Retweet – Another person’s tweet that you forward to your followers is known as a retweet. Often used to pass along news or other discoveries on Twitter, retweets always retain original attribution. Also a verb: use the retweet button

The power of hashtags

Hashtags are used to identify tweets with a particular topic or event. A hashtag is any word or phrase immediately preceded by the # symbol. For example, #UWL12Apps & #Egypt are hashtags. When you click on a hashtag, you’ll see other tweets containing the same keyword or topic.

Hashtags classify tweets and enable you to find tweets on a particular topic. They are often used for events such a conference, football game, or TV programme and also get used for active news stories. Later this week is the HEA’s Teaching and Learning in Social Sciences conference and there will be lots of people including the hashtag #HEASocSci15 in their tweets to signify that the tweet relates to the conference.

Hashtags are also used for so-called tweet chats. This is when a group of tweeters go online at an agreed time to discuss a particular topic. A great example of this is #LTHEchat, a tweet chat about learning and teaching in HE which takes place on Wednesdays, 8pm to 9pm (UK time).

Anyone can create a hashtag, merely by typing it. We have chosen #UWL12Apps as the hashtag for The 12 Apps of Christmas.

One great thing about hashtags is that they enable you to find other Twitter users you may not be following but who are tweeting about a subject that interests you.

Ideas for use in education

1. Set up a hashtag for your subject area, course or module.

You can then use it with your students to share resources with each other. A great example of this is the #citylis hashtag used by the Library School at City University London. The hashtag gets used daily by staff, students and alumni of the LIS courses at the University.

2. Create a Twitter account for your Course/Group/School/Service and use it as a communication channel to share information. Don’t rely on it for urgent messages though as many people dip in and out of Twitter.

3. With large classes you can use it effectively as a class feedback tool, again through the use of a hashtag. The following video from the University of Texas at Dallas shows this in action (in 2009, so in the very early days of smart phones and pre-dating tablets!).

4. Use it to follow your peers or members of communities that you are interested in. For example, other researchers in your discipline,  colleagues across UWL or the wider HE Community. Twitter will help you keep up-to-date, keep in touch and make new contacts.

5. If you’re teaching, encourage your student to use it academically or professionally too. Some job sectors are very active on Twitter such as Advertising, Politics and Journalism.

If you’re going to continue to use Twitter make sure you update your bio and include a profile picture when you’ve more time.

What do you think?

Is this app useful for you? How do you use it? Do you know of an app that does the same thing but better? Any tips for us? Share your ideas by leaving a reply below, or tweet us @UWL12apps or use the hashtag #UWL12apps

12 Apps of Christmas by the University of West London is licensed under a Creative Commons Attribution-NonCommercial-ShareAlike 4.0 International License. Not Just for Kids: Introducing LEGO for Learning and Teaching